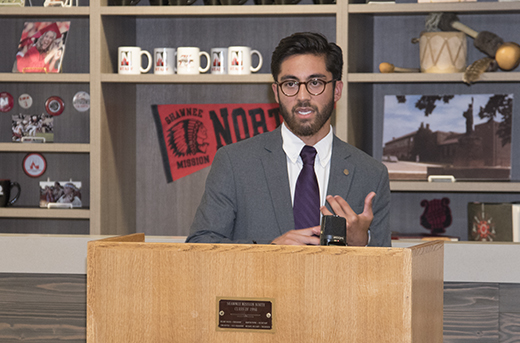 Mario Garcia III, a junior in family studies and human services and alumnus of Shawnee Mission North High School, speaks to audience members about being a first-generation college student at Kansas State University.Establishing a pathway for first-generation college students to enter a university was the focus of a recent launch event by Kansas State University Olathe and Shawnee Mission North High School.

Establishing a pathway for first-generation college students to enter a university was the focus of a recent launch event by Kansas State University Olathe and Shawnee Mission North High School.

The speaker panel opened with Jim Hinson, superintendent for the Shawnee Mission School District. Hinson helped introduce a college advising corps program in Missouri, on which the Kansas system is modeled. The Kansas program is part of the national College Advising Corps.

“This program is simple,” Bosco said. “We’re interested in making sure that no one falls through the cracks, particularly first generation students. I was a first generation student in Syracuse, New York, and I went to a public school and fell through the cracks because I did not have an adviser and the support I needed to be successful. We’re not going to repeat that for these students.”

The program, which recently began its pilot year, will benefit more than 10,000 students currently enrolled in Olathe East and North high schools; Shawnee Mission North, South and West high schools; and Turner High School. These schools have a significant population of students who quality for free and reduced lunch or are forecasted to have a significant ethnic and income shift in the coming years.

The U.S. Census Bureau projects a significant shift in the nation’s demographics by 2050, at which time black, Hispanic and Asian populations will comprise half of the U.S. population while the number of white households will decrease.

As this population increases, college access rates for low-income and underrepresented students needs to increase as well, Gen. Meyers said. Historically, individuals in these demographics are often the first generation to go to college in their family and are unfamiliar with navigating the complex higher education enrollment and scholarship processes.

“If the region is going to grow, then education and talent are important,” Gen. Meyers said. “The workforce needs of greater Kansas City tie directly into this program and underscore why Kansas State University, a land-grant university, is involved in providing increased access to higher education for Kansas students and ensuring the region’s continued growth and success.”